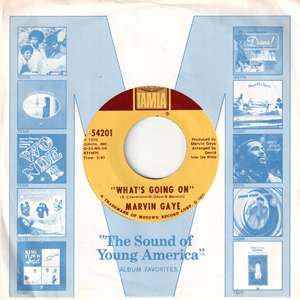 CD 56
1.Jackson 5 - Mama's Pearl
2.Jackson 5 - Darling Dear
3.Joe Hinton - Let's All Save The Children
4.Joe Hinton - You Are Blue
5.Brass Monkey - Sweet Water
6.Brass Monkey - You Keep Me Hangin' On
7.Chuck Jackson - Pet Names
8.Chuck Jackson - Is There Anything Love Can't Do
9.Temptations - Just My Imagination (Running Away With Me)
10.Temptations - You Make Your Own Heaven And Hell Right Here On Earth
11.R. Dean Taylor - Ain't It A Sad Thing
12.R. Dean Taylor - Back Street
13.Marvin Gaye - What's Going On
14.Marvin Gaye - God Is Love
15.Undisputed Truth - Save My Love For A Rainy Day
16.Undisputed Truth - Since I've Lost You
17.Ken Christie & The Sunday People - Don't Pay Me No Mind
18.Ken Christie & The Sunday People - Listen To Your Soul
19.David Ruffin - Each Day Is A Lifetime
20.David Ruffin - Don't Stop Lovin' Me
21.Kiki Dee - Love Makes The World Go 'Round
22.Kiki Dee - Jimmy
23.Kiki Dee - Love Makes The World Go 'Round [Alternate mix]

Back in Detroit Norman Whitfield delivered more hits, this time with a brand new group. Challenged by whispers that his success came from inheriting an already successful group (the Temptations), he created the Undisputed Truth. Their hit, “Smiling Faces Sometimes,” was a dark masterpiece.

All of this wonderful, entertaining, emotional and sometimes quirky music is given a beautiful frame: the “album” style packaging with a rich 148-page booklet featuring unique stories about every song. Co-producer Keith Hughes and Grammy®-nominated author Bill Dahl provide the track-by-track history, not to mention detailed recording and release dates. Harry Webber, Motown’s first official Art Director who went on to become a Madison Avenue legend, opens for the first time a window to the world of Motown album cover art in his introductory essay. Providing the historical overview is Andrew Flory, author and Assistant Professor of Music History at Shenandoah Conservatory.

With longer tracks and a greater number of stereo promo mixes and other rarities, one set covering 1971 would have been a whopping 10 discs. To maintain a manageable size for the release, this volume takes the year up through the end of June. The next set, Volume 11B: 1971, will be 5 discs as well, picking up where this one leaves off and continuing through December ’71.